Chapter 9
The police came. I heard them drive up, of course. I heard their conversation, as well, about the reality show, about whether their hair looked good. I heard them primp in the car before coming to the door. One male, one female. The female came had been her modeling portfolio in the trunk "just in case." They decided she should leave it initially.
Peacock showed them to the basement. I tagged along. The scene was completely different. It was covered in what looked like blood, and brightly lit. The crew was in just finishing changing the scene to make it more spectacular.
"What's going on here?" the male officer asked.
Pin It Now!
Read more »
0 comments

If you're ever wondered how a book gets written, here is your chance to watch it happen. I'm a published fiction and non-fiction writer, but this is my first novel. I'm writing it right here, on the the web. This is the first draft, I expect there will be three drafts before it's ready for submission. It is a humorous, absurdist cozy mystery narrated by a cat. It's the Mr. Kitten Murder Mystery.
8 Waiting for Police
The humans exhibited milling behavior. [expound on this from survival Ripley's book "The Unthinkable"] The Captain was the first to snap out of it. "Alright, this is a matter for the police." Everyone stared at him. "I want everyone to calmly walk up the stairs and go to the library."
The Captain (who was farthest into the basement) made a move to go upstairs and was blocked by the rest of the people, who were still standing around shell shocked. Madeline sidestepped and Helen just stood there. Steve took a small step back.
"Steve," the Captain barked. "Take Helen and help her up the stairs to the library. Move!"
Steven and Helen started up the stairs and Blandings followed them, perhaps copying their behavior. The others followed suit.
Pin It Now!
Read more »
0 comments

Chapter 7 - The Reaction to the Body

This chapter is not interesting or readable...but it does advance the plot....later on I'll add more action and dialog to the bare bones and make it fun. I promised myself I'd write a chapter every day and post it and that's what I'm doing (after an interruption due to the holidays). So here it is.

We were all in the library; that's just the room we would go to (draw off to) after dinner. The Butler, Blandings, insisted on calling it the Drawing Room, and the reality show people just latched onto that, just the way they latched onto his fake British accent. Honestly, the higher our ratings go, the deeper his accent gets.

Helen  didn't scream, but she came into the room but her actual face was shaking and her hair stood out from her head. She just stood in the doorway. Steve was having a tete-a-tete with Tiffany in the corner in such hushed tones that even I couldn't hear them were too occupied to notice Helen. (They were actually discussing Steve taking Helen away on a cruise. Helen had wanted to stay and keep an eye on the house so they were making previsions to address her concerns  and allow her to go, but at the time he seemed neglectful and it looked like they were having an affair. The woman was much more svelte than Helen.) The cameraman was filming the scratches I had made on his arm. The butler was expounding on the myth of a dog's mouth being cleaning than a humans, and talking about "fight bite" which is often fatal, and saying that a cat scratch is like a hypodermic full of germs.

Madeleine looked up when Helen didn't argue with the butler about that and noticed Helen's distress and we thereby saw some glances into Mad's true nature beneath her superficial exterior. We saw  the affection and respect between the two women who were , in fact, blood relations. Just glimpses.

The family and crew went to the basement door and there was nearly another casualty because of the cameraman's enthusiasm to see the blood.

"I can't believe this" the camera man cried in great distress. Everyone looked at him in surprise. He didn't seem like a humanitarian. "My handheld light for the camera has blown out."

The reaction of the other people was one part outrage and one part comprehension. A few shrugs and nods. I yawned.

Then the cameraman turned to me and accused me. The butler piped in with statistics about how many people die after being tripped by their cats. By this time handheld lights had been brought in and the cameras were rolling again. Helen was refuting what the butler said, and the dead body was being ignored until Steve (who retained his perspecitive although he was diffident) finally broke in and suggested that this was not the time for that argument.

Steve ushered everyone into the library and called the police.
Pin It Now!

Steve came home early. He had a secret sorrow at that time and so did Helen. She was nervous because she felt she was not attractive to him because she was fat. The pressure from the reality show brought these feelings up. Then she hired Tiffany to be a live in trainer and cook, but if anything, that made things worse because Tiffany was quite thin. Not to imply that Helen was jealous and catty. I agree with Van Vechten that that is a terrible expression. For what would a catty woman be except a catlike woman, reserved and graceful, redolent of the mystery of love? Steve's secret sorrow was that he was not the rich one in the family. If I haven't already explained the intricacies of old Calvin's will that left Helen her fortune, then let me do that now.

Anyway, Steve did have his chance at redemption - the initial public offering (IPO) of his small software company, IDK Industries. They made iPhone and iPad apps. Hidden object games were very popular and his White Trash Treasure was a smash. (Find the wedding rings on the brother and sister, find the blocks--under the truck of course, etc.)
Pin It Now!
Read more »
3 comments

Alien vs. Predator: A Twilight Parody

Hi, I'm Bella, with the accent on the second syllable, so it sounds like "blah." I just moved to Oregon from Arizona. Stupid Oregon.

In biology class, I trip over some air. Edward catches me. I love his dreadlocks and the way he chuckles through his criss-cross mandibles.

"Why? Did he insert a pod down your throat?"

We chuckle; I bite my lip. The alien overhears. "I knew you'd be prejudiced. Stupid Arizonan."

I eventually slunk back into the morning room seeking companionship. I watched the Captain in my meditative way, trying to fathom what had happened. To quote Carl Van Vechten, the great cat chronicler, it is true that the animals suffer vaguely, but suffering is not less because it is vague. The Captain suffered, I could see it. Winston Churchill had been a boon companion to us both and the grief and loss had not yet come full upon us. I jumped on the Captain's lap and affectionately dug my claws into the worsted wool of his pants. Perhaps this slight gestured brought his grief to the forefront of his mind, for he stood and yelped in pain. I hopped onto the back of the wingchair, comforted by our shared emotion. Robert Langdon covered his head with his pillow as the phone rang. No, he said into the silence of his Victorian-style home which was full of antiques that showed what a well-travelled and educated person of diverse interests he was. He looked at his Mickey Mouse watch which he wore because he was lighthearted and quirky. Three in the morning. I do not want to talk to any mysterious-yet-world-famous callers about anything nefarious, the handsome forty-something professor mumbled. He closed his blue eyes against the cacophony of the phone and reflected upon the similarity of the words cacophony and telephone, both being derived from phon, the Greek word for sound. He was relieved when the ringing stopped because he wanted to go to sleep. He reflected that the words English words sleep and sheep were exactly analogous to the German words Schlaff and Schaff. Langdon smiled with satisfaction because he had nearly bored himself to Schlaff.

His smile turned to a frown as he heard his fax machine start. He pulled another pillow over his head. The pillowcases that covered the pillows with which the Harvard symbologist covered his head were made of the finest Egyptian cotton, and were as white as an albino Opus Dei monk. Ironically, Egyptian cotton, or Gossypium barbadense, was actually indigenous to the Americas, not Egypt. It was Muhammad Ali Pasha who introduced the long-stapled cotton variety to Egypt in the nineteenth century. Also ironically, Opus Dei does not have monks.
Pin It Now!
Read more »
2 comments

Rejection Therapy---Rejection is now a GAME!

Here's my bloodcurdling non-fiction article about it, on NightStalkerGames Pin It Now!
0 comments

I did not feel like writing today, but I did it anyway. That's they way to write a book! Now, having written, I will go to sleep. Here it is. I'll polish it later.

I hastened to the morning room, both drawn by my curiosity and pursued by the horrid wailing from Madeleine's room. When she sings, she sounds like a scalded...well, let us just say she is not exactly on pitch.

How to Make the World's Easiest Kindle Case 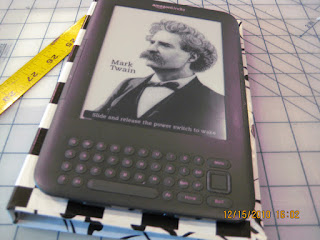 You don't need to spend $60 for a case to protect your $99 Kindle Fire, Kindle Keyboard or Kindle whatever. With stuff you might have around the house, you can make your own, frankly superior, case. It will be superior because, through the magic of Velcro, your Kindle will lie securely in its unique, hand-made case, fully exposed in all its glorious full-frontal nudity. (See above.) This is the only case I have seen that does not cover any part of the front of the Kindle. You can use your Kindle just as it was designed to be used. BTW, this also works for the Nook!
﻿
Pin It Now!
Read more »
10 comments

"Would you like to come out, Winston Churchill?" Captain Peacock asked. "Fly around free for a while?"

"Freedom," the bird said as the Captain opened the large cage. "All great things are simple, and many can be expressed in single words: freedom, justice, honor, duty, mercy, hope."