Edward's mother gritted her teeth as she polished the stainless steel kitchen appliances. "I can't believe you would put that garbage into your body."

"But Mom, the other kids were eating them, so I wanted to try--"

"The other kids? The other kids?" She threw her microfiber towel onto the granite countertop. "Who cares what other kids do? We are different, we are superior. A Happy Meal, how could you? You know our dietary restrictions."
Pin It Now!
Read more »
0 comments


"Nah," his friend replied, throwing him the end of a long rope. He pulled it taunt, then went in a slow circle, tamping down the wheat in the farmer's pristine field. "People know that some of them are fake, but they believe other ones are really made by aliens."

"This is gonna be so funny." Unearthly giggles echoed through the dark night.

Consulting plans laid out the night before, and carefully guided with a compass, the two made a huge, intricate design.

Then Xkjj82 and Cluuth.001 slithered into their spaceship and went home. Pin It Now! 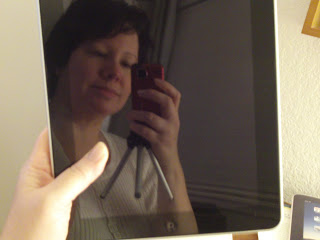 Essential Guide to iPad cases
You've got the hottest toy, a new iPad. Now you need a case to protect its fragile beauty. Let me help you choose the perfect one.

There are three basic types of cases.

A folio protects the iPad and lets you handle it somewhat like a book.

What to look for: Make sure the case covers and protects all edges of the iPad. Decide whether you want a pocket (for a cleaning cloth or paper) and whether you need a holder for your stylus. Some folios are specially designed to function as stands; that might not be as important as it sounds since any folio can be propped up as a stand. Here are some examples along with pros and cons.
Pin It Now!
Read more »
1 comments

I'm trying to write my first book and I'm majorly dealing with writer's block. I know I can write a good short story, but a whole book...it's intimidating.

But, as they say, a journey of a thousand miles begins with a single cliche, so here's my beginning. I promised myself last night (at 3 am, suffering from insomnia and indigestion) that I'd simply write the book as a short story and then, later, fill in as needed to make it a novel. I promised myself I would begin today and that it didn't have to be good, it just had to be written. So, here 'tis. A beginning:


Madeleine came in to the morning room unwrapping an expensive box of chocolates. The Captain looked up as she smilingly set the box on the sideboard. He lifted his eyebrows and drew his unlit pipe out of his mouth. He looked at her interogatively. He'd never known her to do such domestic things as putting out treats for the other inhabitants of the mansion, but she was a mercurial creature.


"Just a little treat, would you like one, Captain?"

"It's a bit early for chocolates," he said, looking out the window to at the late morning sun sparkling through the manicured grounds.

Madeleine put out a manicured hand as if to take a chocolate, and then suddenly pulled her hand back. The Captain's eyebrows, which had fallen to normal position, rised again. Madeleine, thirty-years-old, trendy, thin and a would-be celebutante, never ate chocolate. He was surpised she'd even considered one.

"Well, maybe later," she said. Then she flounced out of the room, leaving the open box of chocolates on the sideboard.

The Captain got out of his Windsor chair, intending to put the chocolates away, but he was distracted by a voice telling him to never, never, never surrender.

The Captain walked over to the large bird cage. "Would you like to come out, Winston Churchill?" he asked the parrot there.

"We will fight for freedom on the beaches, in the mountains, etc," the bird replied.

The Captain laughed and opened the cage. "Polly want a cracker?" Winston half-hopped, half flew out of the cage, stretching his great grey wings and fluttering about the room. The Captain watched him fondly and went back to his chair. "Don't make a mess, now Winston. I'm not supposed to let you out of your cage in here. I don't want to get in trouble with Helen," he said, refering to his niece Helen, the lady of the house.

"Courage is the first of human qualities because it is the quality that guarantees all the others, " Winston replied. The Captain picked up his newspaper again, and sucked on his pipe.

The Captain shrugged, got up and walked to the sideboard. "You know how Helen is about chocolates," he confided to the bird. Helen was slightly overweight and constantly obsessing over her weight. She was also addicted to sugar. "I wonder if Mad brought these in just to get Helen's reaction." He looked around, no one was in the room. He looked down at the box, one of the chocolates was gone. He frowned at the bird. "Winston want a chocolate?"

The bird flew to the window sill and stood with his head tilted to the left. "A fanatic is one who can’t change his mind and won’t change the subject."

The Captain tucked the chocolates into a sideboard drawar and forgot about them.