This is a writing exercise. The idea was to have one character interview another. Here we have the goddess Ishtar interviewing the lolshark.  Ishtar is a very sexy, very vengeful and violent goddess from ancient Assyria and Babylon. The lolshark eats anyone and everyone who annoys Chris Hugh, and that includes Officer Jerkface who gave her a ticket last week! The lolshark can strike anywhere: land, sea or office. 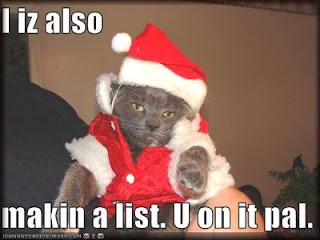 LOLshark Interview
﻿
The elegant woman straightened the sheaf of blank papers in her hands and smiled at the camera. "And now," she said, "Let's welcome our special guest and new audience favor--"

The studio backdrop of Chris Hugh Live shattered into streaming fragments as a great white shark lunged through it, sending a wave of seawater through the cheering audience.

The woman patted herself with the towel she'd had ready and welcomed the lolshark.

"Thank you," it replied shyly. "I'm so happy to be here, my lady, Goddess Ishtar." 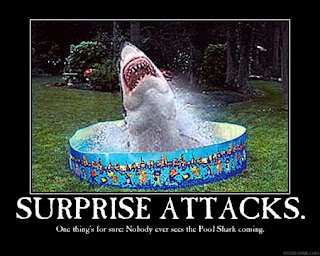 Ishtar made a deprecating motion with her open hands. "No need for formalities. I'm actually trying out my new role as a TV personality, and I'm even going with a new name. Madison Blacksmith. What do you think of it?"

"With a name like that and your beauty and talent," the lolshark said, winking a soulless eye at the audience, "I can see you'll soon be a rapidly rising anchor."

The sound technician did an orchestra sting and the audience laughed at the lolshark's nautical reference.

"Well, I do hope to be a heavyweight," Ishtar quipped to more laughter. "Now, seriously, though, soon I will achieve full dominance of all TV transmissions. Success shall be mine or merciless indeed shall be my revenge." Inexplicably, an arc of lightning flashed across the ceiling. Ishtar took a deep breath and laughed a little. "But getting back to you," she said, "I hear you've been busy devouring annoying politicians."

The crowded roared its approval and the lolshark grinned with five rows of razor sharp teeth.

"But I was confused," Ishtar continued. "Annoying politicians? Is there another kind of politician?" The camera panned over the laughing audience, and Ishtar beamed.

"So tell me, lolshark," she said when the audience had quieted. "In what direction do you see your career going? Where do you want to be in a thousand years?" The audience murmured and Ishtar glanced at the producer. "I mean, in five years?"

"I don't know," the lolshark said quietly. "I hope I remain a creature of wrathful vengeance. I just don't want to end up like Santa Claus." 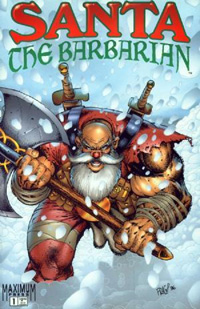 Ishtar leaned back in her chair. "Ah, Santa Claus. I knew him as Santa the Barbarian." A fiery memory awoke in Ishtar's dreamy, half-closed eyes, and the room grew still. The studio lights faded to black and it seemed that Ishtar was alone in the universe, illuminated as if by rippling flames, her hair and skin softly glowing.

"Magnificent, he was," she said in a voice like chocolate and velvet. "A proud man, a fierce warrior and an...energetic lover. Indeed, he was a god of dark justice. In the moonless watches of the night, any evil worm that might ill use a child to sate its vile lusts would be smote by a blast through the chimney. Then Santa himself would come down and chop off the body part that had done evil and hang it on the fireplace mantel. A gift he would give to the wronged child, a talisman to bring aid in time of need. As a reminder of the strength of enduring innocence, he would place an evergreen in the family's home. Then he would ride away in a chariot pulled by ravenous dragons."

She sighed and the studio lights flickered on again, casting their cold glow on a blinking and shaken audience. Children cried. Some of the men had vomited.

Ishtar smilled her 100-watt television smile at the lolshark, unaware of the effect her words had had.

The lolshark opened his mouth. He wanted to jokingly thank Ishtar for her wholesome holiday memories, but it seemed insensitive. Then he thought to kid around with Ishtar about families hanging stockings on the fireplace, given what the original Santa had hung there, but it seemed crude. It seemed too prosaic to tell Ishtar that the evergreen tree had morphed into a festive modern custom. In the end, he just ate her. 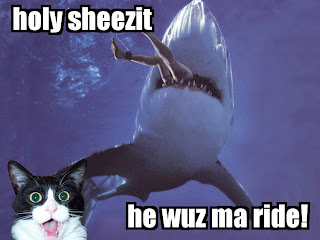