Blondhilda and the Evil Twin 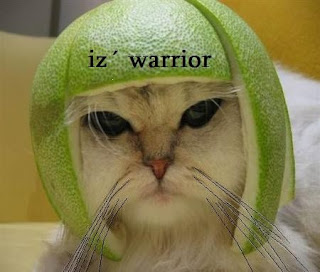 Stanley stared fixedly at the ceiling and walls. Light green ceramic tiles, waterspots showing where tiles had fallen off. Water was dripping somewhere; Stanley could hear it, smell it.


A spider spun its thread from the ceiling, lowering itself toward him. The single glaring bulb in the ceiling backlit the thread, turning it to silver and gold. Stanley tried to get up, then saw he was strapped down. He looked to his feet, saw them in padded leather restraints that were attached to the white enamel hospital bed. His arms were strapped to his side.

"Hello! Nurse! Is anyone there?" The spider landed on his forehead. Stanley closed his eyes and endured. It was only a spider. Then something touched his hand and he noticed the scurrying sounds. How long had he been hearing them without noticing? More sounds and more things, furry whiskered things touching his bound right hand, squirming against his immobilized body, gnawing.

He screamed and fought against the restraints. No help came and he could not move. The rats scampered away from him momentarily, then seemed to pause and think, and then returned, more bold than ever, sure now that he was utterly helpless. He screamed. He screamed and screamed until he knew no more.


* * *
Hours later, a woman ran into the room, breathing hard. She slammed the door behind her, then composed herself and came to Stanley. The rats were gone. She was blurry and Stan's eyes itched. He turned his head to the side and the tears ran onto the thin, bare mattress.

"Blondhilda?" A light of hope sparked in Stan's heart, then died just as quickly.

"Not Blondhilda. I'm Hilda, your ex-wife." Pity and scorn played across the woman's beautiful features

"Ex-wife? I'm married to Blondhilda. I've never been married before. You're..." Feature for feature, the woman looked so much like Stanley's beloved goddess and wife, but the love that illuminated her face was absent, making her nearly unrecognizable. He struggled to rise from the bed.

“Stop it Stanley! Blondhilda is not real," the woman said. "You started writing those horrid fantasies after you failed to sell your novel and they took over your mind. It broke my heart to do it, but I had to have you committed here to the Fine Dragon Sanctuary, and you made so much progress under Doctor Feindrachen. We thought you were cured, but now you’re imagining her again and she’s making you relapse. Work with Doctor Feindrachen and he’ll work with you, he’ll cure you.”

Stanley sunk back onto the bed. "Fine Dragon Sanctuary?"

The woman smiled and brushed Stan's brow. Her hand was cold, as cold as her eyes the color of a glacier. She smiled warmly, but the smiled didn't touch those icy eyes. "It's a play on Herr Doktor Feindrachen's name. Fein drachen, fine dragon."

Stanley closed his eyes. Maybe the woman was right.

"I still love you and care for you," she said. "I want to see you get well and Doctor Feindrachen can treat you and restore your sanity after he purges this Blondhilda from you once and for all. I’m pleading with you Stanley, come to your senses.”

More quickly than a human could move, the woman's head spun to the door and she stood up just as the door burst open. Another woman, a warrior tall and radiant strode into the room. Hilda looked her up and down, then she patted Stanley's hand, and spoke in a pleading voice. "Stanley, please! You’re lost in that delusion again. There is no Blondhilda, she’s just a figment of your imagination.”

Stanley turned his face to the wall, and the warrior woman suddenly diminished. The great sword slipped from her hands and disappeared. She grew shorter, weaker. A slow smile spread across Hilda's face. Blondhilda ran to Stanley to remove his restraints and Hilda grabbed her from behind and held her easily.

"Stanley!" Blondhilda cried. "Don't stop believing in me! I am yours. You are mine. There is no Hilda, this is Loki!"

"You poor deluded woman," Hilda said. Here voice sounded kind, but her face was filled with malicious glee. Stanley still stared at the tile wall of his prison.

Blondhilda struggled against her and tried to reason with Stanley. "Stanley, you can't believe this is a real hospital! You were restrained and alone; that's illegal. Any restrained person must be watched at all times. And you can't be committed just because you harbor a delusion. Only a person who is an immediate danger to himself or others can be involuntarily committed to a psychiatric facility. You know that."

"There, there," Hilda said soothingly as tightened her grip against Blondhilda's neck.

Blondhilda pulled forward and then lunged back, throwing Hilda off balance long enough so that Blondhilda could catch her breath. "This isn't a real psychiatric facility, this is a nightmare asylum. The dripping water...the rats..."

Stanley looked at the two women. Hilda had caught Blondhilda by the neck and was choking her. They grappled, but Blondhilda was no match for the other woman's strength. Blondhilda sank to the floor; her body spasmed.

The rats had been gnawing on Stanley's restraints.

And Blondhilda was dying.

With a mighty effort, Stan broke through his right wrist restraint. He fumbled the left restraint open, then untied his legs. Blondhilda was on fours, gasping on the floor. The window was open and a cold wind blew into the room. Hilda was gone. Stanley jumped up from the bed meaning to run to Blondhilda, to take her in his arms, to plead forgiveness for his lack of faith, but the strain and the long hours of immobility had weakened him. He fell to the floor unconscious.


* * *
When Stanley came to himself, he was outside. What was he doing there? What had happened? A piercing voice interrupted his insular reverie.

“Stanley! Thank God I found you. Please come back inside out of this storm.”

Stanley squinted to see through his fogged glasses and heavy rain blown nearly sideways by the harsh wind. Across the rooftop – why was he on a rooftop? – he saw a woman facing him with pleading eyes as the rain flattened her blonde hair.

“Hilda? What are you doing up here?”

“Stanley, we were having a conversation inside and then you abruptly ran off after muttering nonsense about Blondhilda. I looked all over the facility for you, and then I saw the door to the rooftop stairwell open. Please Stanley, come back with me. Climb in through the window.”

She stretched out her arms. She was so beautiful. He walked slowly toward her.

"No, Stanley, don't!" a faraway voice shreiked. "You're not outside, you're inside. There is no rooftop. If you climb through that window, you'll fall to your death."

"Of course you're outside, your face is wet," Hilda said.

Stan lifted his hand to his face. Yes, his face was wet. He must be outside in the rain. Blondhilda was just a dream, even though she was still screaming warnings to him that he could barely hear. Maybe Dr. Feindrachen could cure him. He quickened his pace and put his hand on the sill. Stanley sat on the windowsill. He's be inside in a second, out of the rain. He would be cured. He was practically cured already; Blondhilda did not exist. He knew that now. Blondhilda's voice gave a final cry and faded away.

Slowly, Stan swung his legs over the sill. The rain was warm and tasted like tears. Then he was falling, falling to the concrete parking lot sixty feet below.


* * *
Suddenly Hello Sailor swooped out of the sky in the flying Jaguar XK8 she'd appropriated from the goddess Freya. Stanley landed in the passenger seat of the convertible.

"Konichiwa, Brown-san!" Hello Sailor bubbled and managed to approximate a bow even as she drove the flying car. The rain plastered her thin blouse against her nubile chest, but her black hair still flowed freely behind her and a glint of light found its way through the dark night and gleamed in her eyes. "Evil god Roki undermined your belief in Blondhilda, but he forgot about me, so I was able to save you!" Hello Sailor beamed and stuck out her small chest with pride. Stanley averted his eyes, but grinned.

Suddenly, the night disappeared. They were no longer flying through the lashing rain. The sun shone, there was the noise of traffic and the Jaguar was parked outside a hospital. The driver's seat was empty, and Hilda spoke from the backseat. "Stanley, I'm so sorry for you. This is just another illusion. Let's go back to the sanitarium."

"I'm not going to fall for it this time, Loki." The illusion disappeared and Stanley and Hello Sailor were back in the flying car. Stanly spoke. "Blondhilda, get rid of him please and then let's meet back in the hot tub."

Blondhilda appeared in the night sky, flying with the aid of her Sword of Aeronautics and Hydrotherapy. She winked at Stanley, plucked Loki out of the car and dragged the exhausted trickster god into outerspace. "See you in half and hour," she called.

Hello Sailor turned the Jaguar toward home. "Brown-san," she said. "That was an amazing illusion Loki created. He used all his strength to do it; it was impenetrable. How did you manage to see through it?"

"I love Blondhilda and she loves me. I'm never going to doubt her or our love ever again," Stanley replied. "And it was easy to see through the illusion. I used to have a Jaguar XK8, and there's no way anyone over four years old can sit in that back seat."