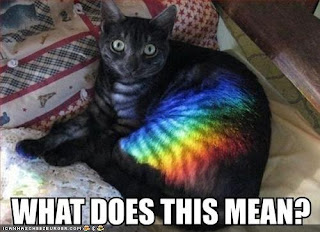 My writing buddy and I generally trade one story a day. He often writes elegantly and with great insight on lesbian relationships. He wrote a nice story where Claire and Heather sneak off to a hotel. Heather is hiding her lifestyle from the other lawyers at her firm; their relationship is quite moving and beautiful which of course inspired me to write a story to ruin their day. Hehe. I hope people will enjoy it in the evil, sarcastic spirit in which it was written. If you find yourself getting upset, don't forget the way I skewered Ann Coulter in The Bride of Frankenstein Dances with Celebrity. Here I'm trying to offend the other end of the political spectrum.


If you're familiar with Blondhilda, see if you can spot her. She's going under a different name here...

Heather Goes Straight
"Well, wasn't that interesting." Eve absently tapped her ornate letter opener against the table. Rainbow Gorilla, the radical gay group, headed by Heather's vindictive ex-girlfriend, had just outed Heather in the middle of a legal conference and thrown banana-cream pies at all the senior partners, including Eve. Eve had used karate to deflect the pie, then had single-handedly overpowered all the protestors and held them for police. She smoothed her flaxen hair and surveyed the male partners who had only just stopped gibbering in the corner.

"I guess my career is over," Heather mumbled.

Eve stared at her with glacial eyes until Heather quailed. "What do you mean by that?" Eve asked softly. 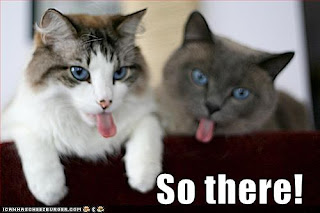 She owed that woman an apology. Heather knew that now and she also knew she did not currently have the strength of character to offer one. She considered returning to the hotel room she was sharing with her girlfriend Claire and winced with disgust. An honest yearning, long denied, stirred in her. She went to a bar near the military base and found herself a man for the night.

Eve replied in a cold, quiety voice. "I would a think a lawyer might consider the implications of her words. Have we ever given you reason to believe you would be discriminated against because of your private life?"

Heather gulped. She knew deep down in her heart that Eve was an evil, conservative, backward, gay-bashing, evil, Republican, Nazi, evil Nazi conservative because she had once seen Eve in the presence of someone who was rumored to have been cordial with another person who had possibly expressed the opinion that Sarah Palin was not the devil. She decided her chain of reasoning was too sophisticated to share and took a different tack. "But, but--Prop 8," Heather sputtered. "You supported making gay marriage illegal!"

Eve stared at her. Although she was a named partner and one of the sharpest legal minds in the country, she was still a young woman, even younger than Heather. She had not yet plumbed the depths of self-righteous, effete pseudo intellectualism, and was often nonplussed when she discovered a new facet of it. Closed-minded hatred masquerading as enlightened tolerance was a many-pronged beast and reminded her of the Hydra of legend, the eight-headed monster: cut off one head and two would instantly grow to replace it. Eve sighed, her thoughts wandering. She wished she were riding her Harley Davidson Hydra Glide motorcycle out on the open desert with Stanley. Eve rolled her magnificent eyes and turned her mind back to Heather. "Once again, as a lawyer you should be more precise. Prop. 8 did not criminalize gay marriage; it defined marriage as a union between a man and a woman. There is a vast difference. And yes, on my own time, I did work on the amicus brief in support of Prop. 8. The voters of the State of California passed Prop. 8. Is it unheard of that a lawyer in a democratic republic might wish to support the will of the people?"

Eve's face softened. "You're young, Heather. Not everyone who disagrees with you is evil. There can be good people on both sides of an issue."

Now Heather's eyes flashed in anger. That couldn't be true! And it couldn't be true that the law firm didn't care about her sexual orientation. Feeling discriminated-against and put-upon was a large part of her identity. It made her feel rebellious and special. And, frankly, keeping her relationship with Claire secret was a huge part of the attraction. Now she'd been outed. If someone were to take away her self-righteous joy at being a member of victim group, she might as well go back to her old boyfriend Grease. She licked her lips unconsciously. Heather loved those bad boys. Too bad Grease was dead many times over. Heather focused on her anger. "How can you justify interfering with gay people's desire to marry?"

"I wonder if there aren't more shades of gray than you recognize. For example, do you think polygamy should be legalized? Islam, a major religion, allows it. Should we allow it here?"

Heather folded her arms over her chest. She was very open minded, especially when it came to anyone she thought of as America's enemy. She regarded her own culture with the deepest contempt and distrust. It made her feel stylish and intelligent. In her mind, Islam and Muslim countries were brutally anti-gay as well as anti-female, but if they hated America, she thought there must be something good about them. "Maybe we should...."

Heather made a mew of disgust. Mormons were Christians and in Heather's mind the word 'fundamentalism' was simply a pointer to the concept 'evil.' "Polygamy is not the issue!" she near-shouted. "Anyway, forget about Prop 8. You tried to set me up with some guy, Theodore Case. You told me to have dinner with him, and when I didn't, you reassigned me to a different case and Human Resources counseled me to do a better job or look for a new one."

Eve looked at her for a long time. "Heather, I didn't ask you to go to dinner with Theodore Case," Eve said. "I asked you to write a demurrer for the odor case. You do remember the litigation for the East Bay Regional Water District sewage treatment center? You were working on it at the time. You were wearing an iPod under your hair while I was talkto to you, weren't you?"

Heather absentmindedly put her hand on Eve's unusual letter opener. Suddenly, a pale light suffused the room and Heather's heart opened and filled with a transforming wave of self-revelation. "Wow," she breathed. "I'm an idiot."

Wave upon wave of blazing insight seared Heather's mind until Eve drew the letter opener away. The pale light faded. Eve put her hand on Heather's shoulder. "Heather, it's not the law and it's not the state that sanctifies a union between people who love each other," she said compassionately. "If gay marriage is real, then it's real, and it doesn't matter what the State of California says."

Heather met Eve's eyes. "And if it's not real, no law will make it real."

"Yes. Excuse me, Heather. I think I'll attend to our banana-cream covered colleagues. I see one of them has begun crying and sucking his thumb again."

Eve left. Heather stood up and suddenly felt unburdened. Somehow, after one brief conversation with Eve and the touch of her strange device, Heather had become a woman who knew her own mind. She glanced at Eve.
Pin It Now!