Duelling Stories: Kathlee Gets a Letter

Kathlee is a creation of my writing partner, Anchorite. She's a combination of various vapid pop music stars. Here's a slice from her life by Anchorite (posted with his permission)....and my response. 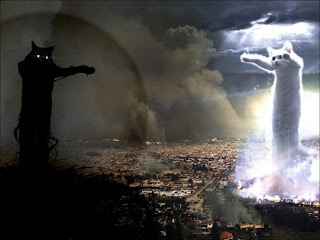 Kathlee Gets a Letter
by Anchorite
Kathlee’s night went like all others: staying out until seven in the morning drinking and dancing with her entourage. Such was the life of the superstar musician with her finger on the pulse of pop culture and three platinum albums under her belt, when the average indie band struggled to move a hundred thousand copies. She slept in until three in the afternoon and after taking a chug of her patented hangover cure, which in her opinion was a better discovery than her brand of energy drinks, Kathlee went to check the mail. She was surprised by one letter from MIT addressed to her real name Kathleen Lee, which no one used outside of the police and the IRS.


The letter came from the dean’s office signed off by him, the president, the chancellor, and the provost. MIT had reopened her file after receiving an anonymous tip and after conducting a de novo investigation, the university administration concluded that it had erred in its previous accusations of plagiarism that resulted in her expulsion. The administrators and several tenured professors apologized profusely for their mistake and offered her full reinstatement in the Biochemistry PhD program.


Kathlee hated remembering those days when she thought her life was over, but at the time she considered it a blessing in disguise when she discovered her talent for vapid pop music that managed to barely skirt the boundaries of the obscenity laws. She also discovered the wonders of booze and partying when she never previously had the time. She had pushed those memories aside, but now MIT had come out of nowhere to offer her a second chance. Would she leave showbiz behind to embark on this new old journey? Kathlee had until the end of the month to send back her decision in the included envelope.

Kathlee skipped across the white shag carpet, carefully avoiding the stuffed unicorns and Hello Kitty paraphernalia. Numerous clear shelves, set against the zebra wallpaper, held samples of Antwerp Mowtelsicks Brand perfumes, purses, hair extensions, shoes and jewelry. One shelf of a small bookcase held all the books the heiress herself had authored, as well as her musical recordings and DVD's of her various reality shows. The rest of the bookcase groaned under the weight of the unauthorized biographies written about her along with the boxed set of her sex tapes.


There was a white desk, clearly seldom used, heavily decorated with pink rhinestones.


This was Twerpy Mowtelsicks's study.


Kath plopped into a polka-dot beanbag to wait, then popped up when Twerpy seemed to appear out of nowhere.


The two women stared at each other a moment, then Twerpy whipped off what almost looked like reading glasses and the two Best Friends Forever ran to each other, hugged and jumped up and down. An assistant brought them two Diet Cokes and a plate of celery and carrots, then left discreetly.


Kath brought the letter out of her pocket. "MIT!" she said excitedly.


Kathlee's own smiled flickered and she wondered why she'd bothered coming to the most famous Dumb Blonde in America to ask for advice about going back to college. Then she forged ahead.


"I have a chance to go back to school and graduate!"


Antwerp smiled knowingly. Then she stood up, balancing on her six-inch Antwerp Mowtelsicks heels, and tottered over to her wall. A high school equivalency certificate had pride of place among framed photos of Antwerp meeting other celebrities and heads of state.


Antwerp pointed to the letters and she sounded them out. "G...E...D.," she said proudly. "I've already graduated."


Kathlee coughed and put her letter away. She changed the subject. "I'm sorry to hear you were barred from Japan because of that, um," Kathlee looked at her drink significantly, "problem."


Antwerp had been convicted of carrying cocaine in one of her Antwerp Mowtelsicks Brand purses. She'd gotten probation, free publicity, and a run on that style of purse. She shrugged. "The actions of Japanese authorities were beyond my control, so I'm relieved of my contractual obligations to make appearances in that country, leaving me free to attend to pressing matters--" Twerpy bit her lip.


Kathlee blinked at her.


Kathlee nodded slowly, never taking her eyes off the other woman. "When we were drunk last night, I thought I heard you mention you were overexposed in Japan and were concerned about the Yen-Dollar rate of exchange..."


Twerpy sighed and drew out her reading glasses. Kathlee nervously placed the letter her hand. "MIT Admissions has made quite the admission," Antwerp said grimly after a moment. "You clearly have a cause of action for defamation, although given the success you've achieved, by you own admission, as a direct result of M.I.T.'s wrongful action, it might be hard to prove damages. All the same, the publicity could prove valuable. You'll want to run it by your focus group."


Kathlee gaped at her.


"I assume you have a marketing focus group?" Antwerp walked to the far wall of her study, and this time she did not totter. She activated a secret switch and a door opened, revealing a large workspace filled with books and banks of computers.

Kathlee walked in and Twerpy shut the door.
"You can probably use your leverage to get MIT to allow you to complete your degree online and under an assumed name," said America's Dumbest Blonde. "That how I got my Harvard MBA and my law degree from Stanford."